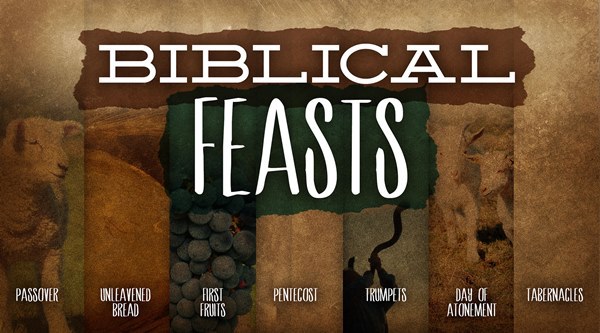 The other day I had a conversation with a 'Christian' brother whom I invited to Hope of Israel Charlotte to celebrate the Lord's Fall Feasts that are fast approaching. His initial response to the invitation revealed no interest whatsoever in joining in with a Messianic community to celebrate G-d's appointed times. I picked up on his indifference and was saddened but determined to shed some light on G-d's redemptive program through His appointed schedule.

As the conversation progressed, Chuck* (his name has been changed) voiced that he was not Jewish and doesn't see the need in celebrating the “Jewish” festivals.  Here was a wonderful opportunity for me to educate my fellow believer in the Lord on the truths of G-d's word.

Are the Biblical Feasts Jewish?

This is a wonderful question to ask. When was the first mention of the phrase "Appointed Times" in the Bible? Was it when the Jewish people came into existence or could it have possibly been before? If G-d is an unchanging G-d then my guess would be He prescribed them long before He created what we now know as the Jewish people.

When we turn to the Creation account in Genesis, we read:

The English word for seasons is also translated "Appointed Times". The Hebrew word for Appointed Time is MOADIM - the very word that G-d used in Leviticus Chapter 23 for outlining His redemptive program for all of humanity. While G-d created the MOADIM for all mankind to meet with Him, He later encouraged Israel to keep His appointed times with Him because His desire was to set aside time to meet with His people.  Unfortunately, mankind’s responses eventually fall prey to doing their own thing -their own way.

"The Lord spoke to Moses, saying, 'Speak to the people of Israel and say to them, these are the Appointed Feasts of the Lord that you shall proclaim as holy convocations; they are My Appointed Feasts...'" (emphasis added)

While the audience is Israel, G-d’s words are very specific and they point to the Author of the Festivals. What have we discovered thus far? First of all, G-d's purpose in creating the "heavenly bodies" in Genesis 1 was to reveal to humanity His Appointed Times for humanity to come and meet with Him. Secondly, we see that His Appointed Times have always been G-d's Festivals and while the Jewish people were initially entrusted with keeping these sacred times, they were not the only people group that it was created for.

If you read further on in Leviticus 23, you will discover the entire Redemptive calendar that G-d has established. It begins with the seventh day or the Sabbath (Shabbat, in Hebrew). A quick history of the church unfortunately reveals how man has changed G-d's Appointed Times where an unchanging G-d never changed His mind on the subject matter. I’d like to illustrate with the following story:

One day, a loving father informed his children that a special dinner had been prepared and would be ready at 6:00pm later that evening. His children were busy and distracted by their own cares not seeing the full value of his time invested and although they promised to attend, they eventually moseyed in at 8:00pm instead. Will this loving father refuse his children? Of course not, but will the children have missed out on the blessing of spending special time with their father? Yes, they would. The same is true of us today.

Unfortunately, through the course of history, G-d’s “special” times set aside to meet with Him were replaced, rejected or changed. His Sabbath was replaced with a “Sunday” celebration (SUN-day  is rooted in the pagan worship of the SUN god), the feast of Passover was replaced with "Easter", the pagan worship of the fertility goddess Ashtoreth, in Hebrew or Ishtar, in Babylonian.  Eastern Christianity kept the name Passover but replaced its celebration with pagan rituals and dates.  Other Feasts, all of which were normative in the 1st Century believing communities, have also been forgotten or replaced and are no longer celebrated as a whole in the body of believers. Yet, when Yeshua was crucified, it was on the Feast of Passover signifying our Passover Lamb who took away our sins once and for all.  When He was resurrected, it was on the Feast of First Fruits signifying He was the Firstfruits of all Creation and our redemption from the dead. When G-d poured out His Holy Spirit, it was on the Feast of Pentecost, signifying G-d’s fulfilled promise of sending us a Comforter and having His law written on the tablets of our hearts and placed in our minds that we might be enabled to walk our lives in accordance to His word and His law. The very 1st giving of the law on Mount Sinai we found that 3,000 people died in their sin (Exodus 19), but in Acts 2 we see the very fulfillment of this Appointed Time and that 3,000 souls were saved. What a loving and faithful G-d we serve.

While the 4 spring Festivals of G-d have all been fulfilled by Yeshua, the fall Festivals are yet to be fulfilled by Him. This bring us to "The Reason for the Season", so to speak.

If you identify yourself as a follower of Christ (Messiah) then are you commanded to celebrate His appointed times? The answer is found in the encouragement of the Apostle Paul:

"So I ask, did they [Jewish people] stumble in order that they might fall? By no means! Rather through their trespass salvation has come to the Gentiles, so as to make Israel jealous. " (Romans 11:11 ESV) (emphasis added)

While believing Gentiles are grafted into the Jewish olive tree, are they to reject everything Jewish? According to Paul's reasoning, it must be quite the contrary. A Gentile's calling is to make Israel jealous. How can they make Israel jealous by denying G-d's very Word?

The greater Jewish community is preparing to celebrate the fall Appointed Times with the Lord and unfortunately, they still await their promised Messiah. We, as believers in the Messiah of Israel, can point them to Yeshua (Jesus) who is the Messiah of Israel and the Savior of the world. As Messianic Jews and Gentiles believers are preparing to celebrate the upcoming Feast of Trumpets, the Day of Atonement and the Feast of Tabernacles, let us pray and stand firm with Israel. Find a Messianic Congregation near you and join them in celebration of G-d's faithfulness to Israel and to the Nations.