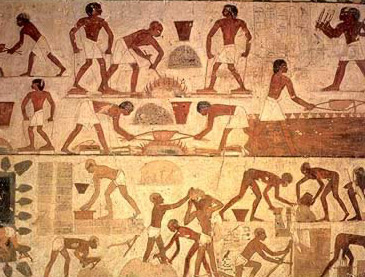 In our last meeting, we covered the point that evil leadership leads to the oppression of people. The king of Egypt decided to resist God's plans for the children of Israel by executing his own final solution plan - first enslaving the people and then killing their innocent babies. Human wisdom is always in opposition to God. The harder the Israelites worked, the greater they grew, becoming a multitude of people. In essence Israel's blessing became Pharaoh's problem (Genesis 17:6). The battle began not between Pharaoh and Israel but between the God of Israel and a form of an anti-Messiah, Pharaoh. God had promised that He would multiply the children of Israel and Pharaoh begins to try to reduce their numbers with his futile plans. How often in our own lives do we do the same in attempting to go against God's plans for our lives? And, what is the success rate of us doing things our own way instead of submitting to God's plans? The main idea here is that even when oppressed, God's plan for the Israelites was still in progress and God was building them into a nation – His nation. Anton brought up an excellent point during our discussion. What were the chances that the Israelites would have willingly left Egypt since they had everything they needed in the land of Goshen? Great question! Can we ask ourselves the same question?  Are there things in our own lives that are in the way of God's fulfillment of His plans for us?

"He dealt shrewdly with our race and forced our fathers to expose their infants, so that they would not be kept alive.” (Acts 7:19)

"Come, let us deal shrewdly with them, lest they multiply, and, if war breaks out, they join our enemies and fight against us and escape from the land." Therefore, they set taskmasters over them to afflict them with heavy burdens. They built for Pharaoh store cities, Pithom and Raamses. But the more they were oppressed, the more they multiplied and the more they spread abroad. And the Egyptians were in dread of the people of Israel. So they ruthlessly made the people of Israel work as slaves and made their lives bitter with hard service, in mortar and brick, and in all kinds of work in the field. In all their work they ruthlessly made them work as slaves. "(Exodus 1:10-14)

The cities that Israel built for Pharaoh became the centers for their idol worship. Rejecting God's plan for our lives can lead to similar consequences. By rejecting God, we are saying we know it better - what is good and right for our lives. The oppression and the building projects that Israel undertook for Egypt resembles the construction of the tower of Babel (Genesis 11:4). The Hebrew words are the same. They made bricks and mortar like the people of Babel. In addition, the names of the cities they built carried the following meaning:

Both of the cities are said to have been the storehouses, but also so much more. Jacob had originally moved there to be with his family (Genesis 47:11). They were simple Hebrew shepherds. But over time and because of the wicked scheming subsequent Pharaohs they were turned into Egypt's builders, field workers and whatever other roles were required.

For us, the season of Passover is approaching us this month and each year we are told in scriptures to remember the hardships that Israelites experienced in Egypt. The original word for bitter is marar H4843 (מָרַר).  This is represented during the Passover Seder meal as bitter herbs in order to remind us of our slavery to sin before Messiah's atonement for our sins and also of our deliverance from sin. Like the Israelites, each one of us had to come to our own sense of the enslavement to sin and the bitter consequences they had on our lives. Praise the Lord for His faithfulness to all people thru the Atonement work of Yeshua on the crucifixion stake. We are saved not thru works but thru His precious atonement for good works!

2. The Fear of God Leads to Life

In contrast to Pharaoh's fears and destructive actions, we see two Hebrew women who chose to fear God and not man, resulting in God not only prospering the Israelites but also looking favorably upon the midwives, by blessing them giving them their own families, as well.  We read:

"Then the king of Egypt said to the Hebrew midwives, one of whom was named Shiphrah and the other Puah, "When you serve as midwife to the Hebrew women and see them on the birthstool, if it is a son, you shall kill him, but if it is a daughter, she shall live." But the midwives feared God and did not do as the king of Egypt commanded them, but let the male children live. So the king of Egypt called the midwives and said to them, "Why have you done this, and let the male children live?" The midwives said to Pharaoh, "Because the Hebrew women are not like the Egyptian women, for they are vigorous and give birth before the midwife comes to them." So God dealt well with the midwives. And the people multiplied and grew very strong. And because the midwives feared God, he gave them families. "(Exodus 1:15-21)

As we mentioned before, the author of Exodus doesn't find it important to provide us with Pharaoh's name but from all of the characters mentioned in Chapter one we are presented with the midwives' names - Shiphrah (meaning fair) and Puah (meaning splendid). They truly lived up to their names. By rejecting the commands of the Pharaoh, rejecting the law of the land, rejecting anything contrary to God's words, they put their own lives at risk. The world's viewpoint on the sanctity of life, or sadly the lack thereof, never lines up to the value God places on human life. We are all made in His image.  We all have the very breath of God sustaining us.  By killing a human being we destroy the very image of God.  This is why murder is wrong, punishable by capital punishment. Pharaoh's attack was on the most vulnerable and innocent within a society; it's children. The value placed on life was decided by a man rather than by God. In Ancient Greece, any baby with physical defects were to be thrown over the cliffs since, according to their society, defects equated zero value, or did they? Our country is not guiltless of such a crime, are we. Our hands are stained by blood.  Since the Supreme Court ruling over Roe v. Wade, over 50 million of our own innocent have been killed all in the name of free choice. Humanity as a whole doesn't change, but history reveals to us that individuals that place their trust in the God of Israel can and will change, and as a result, society can be impacted to become a far better place for all.

Had the midwives lied to Pharaoh? Does the God of Israel ever reward for deception? We must view this in light of other scriptures.

Believers are always confronted with a choice to obey God as their ultimate authority or to obey the law of the land. Peter and other Apostles were forbidden to proclaim the Good News on the streets of Jerusalem and when they were arrested, here is how Peter responded:

But Peter and the apostles answered, "We must obey God rather than men. (Acts 5:29)

While only two Midwives were mentioned in the narrative, the population of the Israelites could not possibly have been served by only the two of them. Is it possible that they were the two placed in charge of all others who helped in the delivery of the Hebrew babies? If they were in fact in a position of authority, their stewardship responsibilities most likely provided training and support to many others. Another point to consider in the text is that Pharaoh doesn't seem to question the midwives' answer to him. You see, we are never encouraged in scripture to lie, to cover, or to deceive but rather to resist evil.

Then Pharaoh commanded all his people, "Every son that is born to the Hebrews you shall cast into the Nile, but you shall let every daughter live." (Exodus 1:22)

Pharaoh attempted to resolve his genocide first as a matter of private affairs but this didn't seem to get the job done. So as we concluded our study, we saw how his private affairs spilled into public decrees - to be executed out now by all his Egyptians. If the Israelites hadn't despised their taskmaster before now they were their closest of enemies.

The themes and challenges the Israelites faced long ago in Egypt are as crucial and vital to us now as it was during the Egyptian rule. Peter encourages believers:

"Beloved, do not be surprised at the fiery trial when it comes upon you to test you, as though something strange were happening to you.” (1 Peter 4:12)

The question still remains: Who are we going to fear? Are we more afraid of man or of God? Let us, as men, continue to grow in His word so that we can be encouraged and strengthened, becoming encouragers to others.